The Poppy's War Against War

The Poppy’s War Against War: A Brief History of the White Poppy
Nathan Little

John McCrae was a medic from Guelph who worked with the 2nd artillery unit in the Canadian Forces in 1915. Near the Flanders region of Belgium on Sunday, May 2nd, during the second battle of Ypres, he witnessed the death of his 25 year old friend Lieutenant Alexis Helmer, who was studying at McGill University (Doyle 1984). McCrae and some others took what was left of Helmer’s body to a gravesite and buried him when there was a moment of safety. The chaplain was not available, so McCrae performed the burial ceremony for his young friend (McClelland 2014).

The next morning, he was seen sitting on the back of an ambulance wagon next to where they had buried Helmer, writing.

In Flanders fields the poppies blow
Between the crosses, row on row,
That mark our place; and in the sky
The larks, still bravely singing, fly
Scarce heard amid the guns below.

We are the Dead. Short days ago
We lived, felt dawn, saw sunset glow,
Loved and were loved, and now we lie
In Flanders fields.

Take up our quarrel with the foe:
To you from failing hands we throw
The torch; be yours to hold it high.
If ye break faith with us who die
We shall not sleep, though poppies grow
In Flanders fields.

This poem first appeared in Punch Magazine on December 8th, 1915. It was quickly regarded as one of the greatest, simplest tributes to soldiers in the field (Doyle 1984). Soon afterwards, parts of McCrae’s poem were used in patriotic propaganda efforts, especially to sell war bonds, recruit soldiers, and during the 1917 election, in support of conscription. It entered into the public space as a statement regarding necessary sacrifice in a necessary war (Menzies 2011).

But according to Richard Doyle, previous editor of the Globe and Mail, McCrae revealed some of the meaning of his poem to a Canadian chaplain, and this information has the potential to challenge the popular discourse about war and remembrance. “The “foe” mentioned in the line ‘take up our quarrel with the foe’ was not intended to be the German or Austrian soldier; it was the spirit of warfare. Allied soldiers had been assured [that WWI] was a war to end war. The torch was the will to realize this ideal.” (1984).

Is war a necessity? Peace has never been accomplished through war. Can the human community come up with new, creative solutions to resolve issues? John McCrae apparently believed that there needed to be war to end all wars. A war against war. 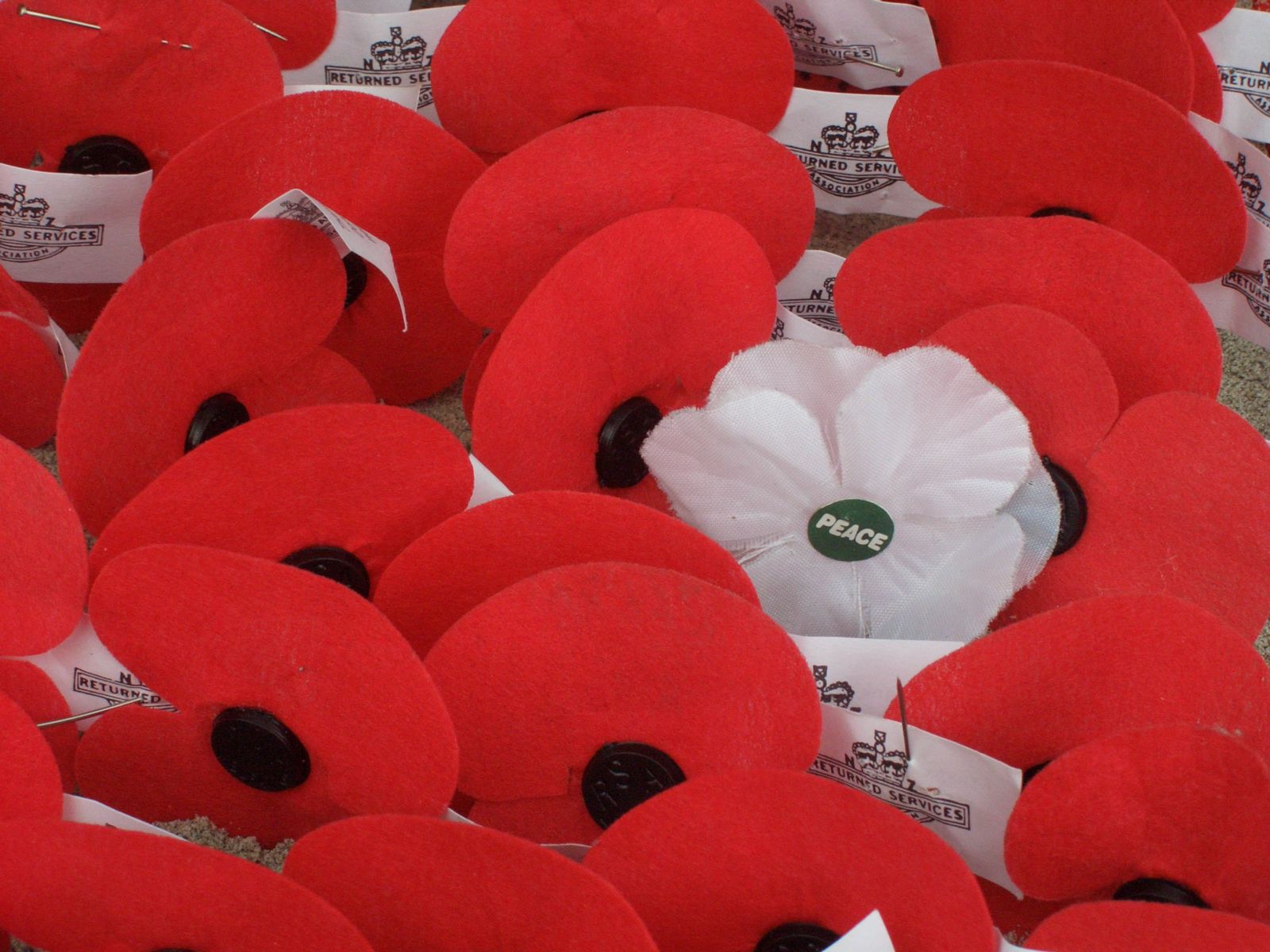 The will to change how we relate to warfare has had several different signifiers, most notably, the poppy. The red poppy, or the remembrance poppy, is the best-known symbol of remembrance that we have in Canada. Its significance came from McCrae’s reference to the poppies that grew on the graves of the dead in Flanders Fields.

The red poppy was officially adopted by the Great War Veteran’s Association in Canada (the predecessor of the Legion) as its Flower of Remembrance in 1921. The Legion’s website outlines the significance of the red poppy today: “The Poppy has stood as a symbol of Remembrance, our visual pledge to never forget those Canadians who have fallen in war and military operations…[a]s well, donations received during the Poppy Campaign annually raise more than $14 million for the support of Veterans and their families.” (legion.ca 2014). The state needs to take care of those who fought on its behalf, and Canadians use the red poppy to do exactly that.

But there have been people who have used a different symbol on Remembrance Day since before the Second World War. These organizations, which now include Voice of Women for Peace (VOW), The Quakers, Conscience Canada, and The Peace Pledge Union (PPU) amongst others, think that Remembrance Day provides a space to engage in other dialogues about our involvement in international conflicts and about our society’s normative beliefs about war and militarism. These people wear white poppies.

The white poppy was originally distributed and sold by The Women’s Cooperative Guild, a pacifist group that was part of a massive diplomatic and public effort to avoid entering World War One (VOW 2014). They began to distribute and sell white poppies in 1933 as a symbol they could wear on Armistice Day to demonstrate their opposition to war and a definitive pledge to peace (PPU 2014). According to the Peace Pledge Union, an organization that makes white poppies in the UK, “The White Poppy symbolizes the belief that there are better ways to resolve conflicts than killing strangers. Our work, primarily educational, draws attention to many of our social values and habits which make continuing violence a likely outcome.” (PPU 2006)

Today, wearing the white poppy is a low-risk, low-cost direct action that publicly identifies oneself with peace at all costs (Rigby 1998). It symbolizes a belief that, as a people, we must embrace non-violent conflict resolution, and change the message of remembrance. The white poppy gives a voice to those who want to withdraw their support from war and rededicate our country to peace.

The Red and White campaigns have similar goals, but have been divided and their relationship has been controversial. The white poppy campaign has accused the red of glorifying war and making war an acceptable part of our lives (PPU 2014). In 2010, the Legion threatened to prosecute the white poppy organizers over a copyright infringement because they “own the trademark on the poppy" (CTV 2010).

I asked for an interview with a representative at my local Legion branch in regard to this article, and they refused. They said, “We have chosen not to comment on the White Poppy…the red Poppy symbolizes remembrance [and] it helps us to remember those who gave up their life so we can live in peace…Any other meaning put on the Poppy by outside organizations is not ours and ill conceived”.

What about coexistence and cooperation? The red poppy signifies remembrance, respect, and practical care for veterans, and the white poppy signifies remembrance, reflection, peace, and dialogue about how we can create a nonviolent world. Some people wear both poppies, or donate to the legion and only wear a white one. There are no easy answers in making a better world and only a multifaceted approach will help our world become more peaceful. Red and white poppies are not in binary opposition, they both are “Tak[ing] up our quarrel with the foe”. We must realize that the torch is ours to hold. Division creates further conflict, further war.

Many wars have been imperial games between competing European powers. Some have been responses to massacres and genocides that threaten basic freedoms. Both types send millions of young people to their deaths. Is war a necessity? Maybe right now, but hopefully not forever. So wear a poppy. Or don’t. But be educated about our country’s contribution to a world of war and get involved and engaged with peace efforts if you hope to have a more peaceful world. John McCrae did. Do you?

“Take up our quarrel with the foe: to you from failing hands we throw the torch; be yours to hold it high. If ye break faith with us who die we shall not sleep…”