"The Future of London" is Yours to Decide 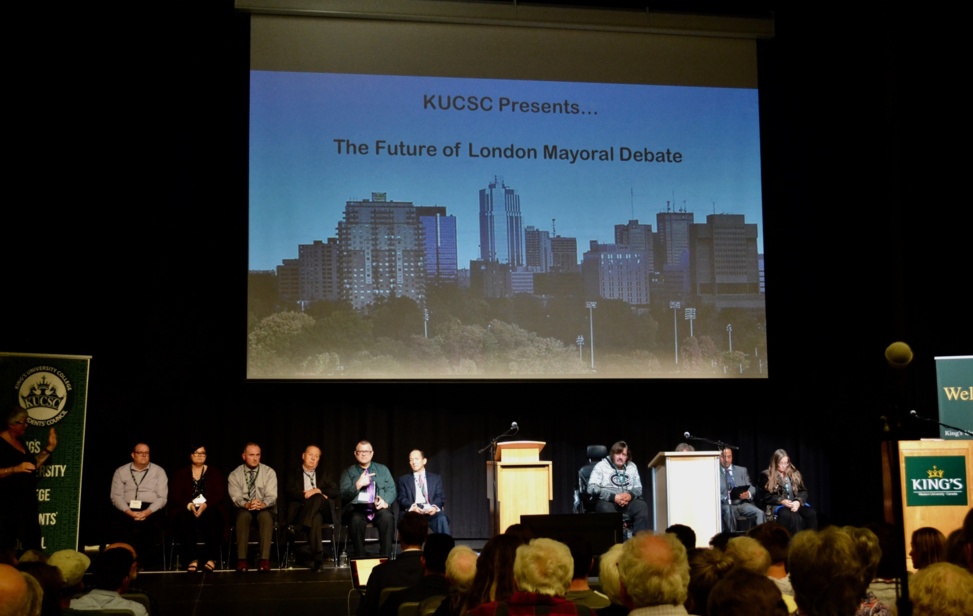 On October 3rd, in King’s University College’s own Kenny Theatre, “The Future of London Mayoral Debate” took place. The debate was hosted by the King’s University College Student Council and within minutes of opening its doors, the venue filled to capacity as students and London community members alike waited anxiously for the main event to begin. The ten candidates in attendance were: Mr. Paul Cheng, Mr. Ed Holder, Mr. David Millie, Mr. Paul Paolatto, Mrs. Tanya Park, Mr. Vahide Bahramporian, Mr. Dan Lenart, Mrs. Nina McCutcheon, Mr. Carlos Murray, and Mr. Sean O’Connell. The candidates spent the better part of two hours answering questions from both members of the King’s and London community and debating against one another on topics ranging from the Bus Rapid Transit (BRT) expansion and Active Transportation, to London’s Poverty and Housing Crisis, and Safe Injection Sites within the city.

Throughout the night, a problem which concerned both the students of Western and the overall London community was the BRT expansion. A new design of London’s transit system would allow electric powered transit buses to carry more people faster across the London area. This plan, based on frequency of more electric buses per route at busier times, has caused much controversy among Londoners, ultimately forcing candidates and Londoners to pick a side of the argument (Maloney, “Bus Rapid Transit 101”). While many candidates, like Ed Holder and Paul Paolatto, are strictly against the plans for the new BRT development and are advocating for alternatives to the change within the system, a stand out supporter of the new BRT development was Tanya Park. She reveals the plan will succeed and pay off in the long run for the city, as she stated during the debate, “We cannot say, no thanks to this [BRT] opportunity... this level of business is busting at the seams, and in any line of business when you are looking to grow it, you look to where the growth opportunities are and you do just that, you invest in them. This is exactly what this plan is about, investing in public transportation.” While conflicts and complaints rise in opposition to the BRT plan, such as budget concerns, supporters have also shown their commitment to the efficient BRT system. The debate shows that this issue will not be resolved until the mayoral seat is filled.

Another major issue that was discussed at length was the topics of poverty and homelessness, with a particular focus on London’s Affordable Housing Crisis, an issue that has been with London for many years. This topic was primarily introduced during student questions when it was noted how London has failed to meet the low-income housing demand by more than 4,500 units. The student asked how the candidates, if elected, will be able to expand low-income housing in London. Throughout the night, the candidates had many responses to this and other questions surrounding the housing issue. Paul Paolatto stated that he “would like to tap our pension funds to provide us with that [housing] capital, to repair the 3,500 units that are now tired, and bring 3,000 additional units online to help us [as] we need to start taking care of our people now, today, and the way to do that would be… finding those resources to help solve the problem.” On the other hand, Nina McCutcheon believes that there is a lack of authority within London regarding poverty, and an orderly affordable housing financial plan would be the best response to the poverty crisis, as she states, “We need to be more organized and get things done.” While responses and promises vary from candidate to candidate, there is only one question that remains: will those plans and promises be kept, so we can truly see change within this scope of inequality in London?

As I sat and listened to my fellow peers and community members speak their concerns to a panel of qualified and professional mayoral candidates, I realized that there are many issues on the table, many promises made, and many catchy slogans announced. However, with any mayoral election, the poll outcome is dependent on the people who have done their research, asked their questions, and made informed decisions about who they want running their city. So, it doesn’t matter if you’re staying in London for a degree, a job, or for life, your vote can and will make a difference.

Please refer to the following candidate websites and links below for more information: