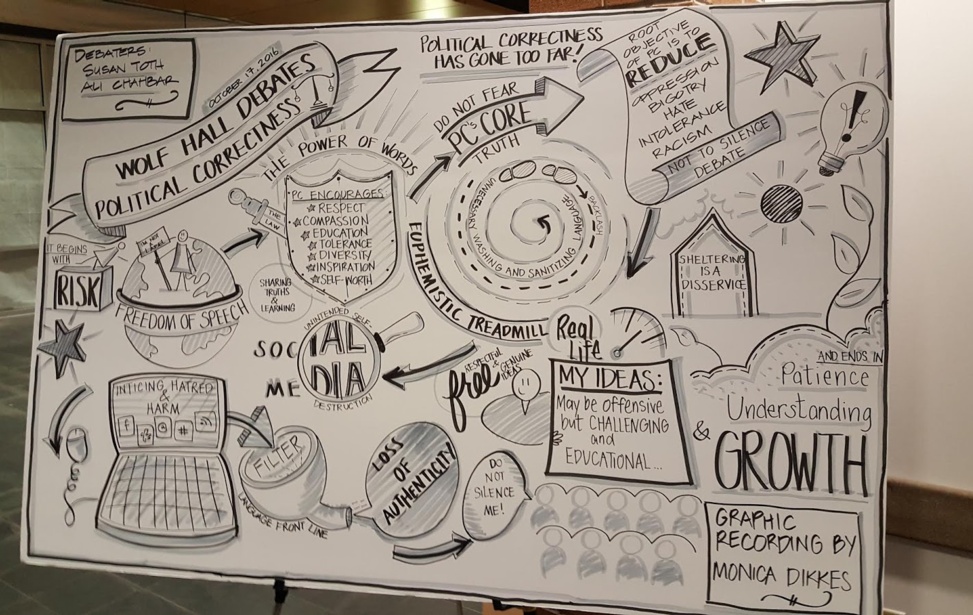 Political correctness might be seen as a way to coddle someone via language, but it is so much more. Language helps to shape reality, and what we say has an impact, no matter the magnitude. If we define something as real, it is real in its consequences.

The United States is in a very vulnerable state right now – it is currently experiencing social upheaval, riots, disappointment, and for some, excitement; all at the same time. Half of The U.S. voted for a man that claims that some of the women that have accused him of sexual assault are not attractive enough for him to have sexually assaulted them.

This speaks volumes to the reality that has been shaped down south. The U.S. would not be in this mess if they had MORE political correctness – language does shape reality, and if the willfully ignorant and bigoted had been exposed to more politically correct culture, then maybe they wouldn’t have voted for the series finale of Trump over the season finale.

There are a lot of people on edge, and it is important to be mindful of what is being said. With the impending Donald Trump presidency, what I think about political correctness has certainly shifted. Trump appeals to people who aren’t politically correct because he isn’t a politician, right? Trump’s target audience is largely uneducated people; people who feel like they have either been forgotten or that they have been cheated by the system.

I must say that I am scared for my neighbors; I am scared for African-Americans, the LGBTQ community– choosing your language is an easy yet effective way to make the marginalized feel quasi-accepted, comfortable, and safe despite the now overt racism and the changes American will soon undergo. Ultimately, we need to band together and continue to take political correctness further in certain areas. We need to make sure that people feel comfortable in their own skin.

Racism has two components, an active one and a passive – it has prejudice, and then it has oppression. It has the preconceived idea that oneself has a higher standing in some regard, and then it has one acting in some way upon that premise. You can still say or do something that is racist even if you are a good person, as it has been so far ingrained into our society. However, if you are abusing the fact that you stand in a position of privilege or power, that is when it becomes an issue. If we are talking about it in an educated manner and are not condescending anyone and not physically harming anyone then we are not the oppressors.

Healthy debate is a very good thing, and far too often political correctness can stifle differing opinions, rather than discussing, understanding, and educating. I see a perfect example of this in my first-year sociology course, versus some of the controversies in my second-year courses. Those in my first-year class seem scared – whenever the professor asks for input on a controversial topic, people are reluctant to raise their hand, they are afraid to be wrong as if there is a “right” way to solve a variety of systemic issues. In contrast, those in my second-year courses speak about controversial issues much more freely, because they recognize that we are in an environment that encourages constructive conversation. They are less likely to be labeled if they say something questionable.

So, has political correctness gone too far? I would say that is subjective. Due to our fears, we often censor ourselves, we hold back, in fear of hurting anybody’s feelings, even though these topics and issues need to be discussed. We live in a (sort of) democracy and by not openly speaking we are undermining our cherished values. Political correctness can discourage deviance and differing opinions. Political correctness promotes conformity; we need people to think differently so that we continue moving forward – if everyone had the same opinion and handled situations the exact same we would always be in the same place.

In some cases, we are in fact sanitizing language that doesn’t need washing. We have far bigger fish to fry than worrying about what kids are wearing to school on Halloween. We need to change our language with the times, but one could argue that times are changing because we changed our language. Even if I am wrong, and political correctness hasn’t gone too far, I do know one thing. As W.I. Thomas says, “If we define something as real, it is real in its consequences”. Given the current state of North America, and the large desire to break the status quo, it is safe to say that a large portion of people agree that something needs to change. People do feel like they are being silenced. People are done with the corruption in Washington and are done with being under/misrepresented. However, we need to strike a delicate balance between being blunt, while also being mindful. We need to promote a more open society where we can talk about things in a respectful manner, but not as to be so respectful that we don’t express how we truly feel.