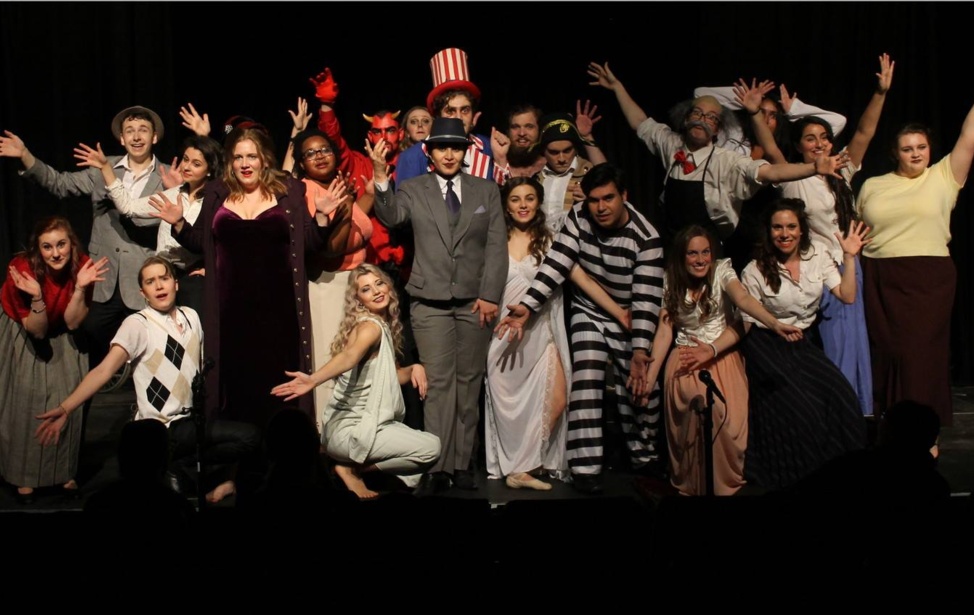 Directed by King’s student, Shelby Price, “Reefer Madness” is a satirical musical based on the 1936 film titled “Tell Your Children.”

The musical explores, in a comedic way, the dangers of using and abusing the illegal narcotic, marijuana, which is presented to the audience by a lecturer (played by Elena Reyes). The lecturer guides the audience through the story of young Jimmy Harper (played by Robert Popoli) and how his addiction to the drug turns his life as a fine, young student into a marijuana menace. Through the hooligans at the reefer den, Jimmy becomes a marijuana addict who begins ditching his girlfriend, Mary Lane (played by Taryn Wichenko), running over an old lady, and even smacking a sloppy kiss on his own mother! “Reefer Madness” is a learning experience which provides the audience with an over-the-top performance of how marijuana can change children’s lives for the worst, and why parents must protect them.

The show ran from January 25th to the 28th, and it definitely did its job as a comedy. There wasn’t one evening where the audience was not in hysterics as the very talented cast provided an over-exaggerated portrayal of high teenagers and adults. With Mr. Poppy (played by Patrick Avery-Kenny) providing malted milk “Down at the Ol’ Five and Dime,” marijuana junkies getting lit in a highly entertaining orgy, and Jesus (played by Thomas Krasey) leading a choir of angels, the King’s musical entertained the audience with its random “what the F?” moments as it hit them with a triple threat of great acting, singing, and choreography!

To get a better understanding about the musical, I met up with director Shelby Price to ask her a few questions about her show. Reefer Madness was Price’s first musical that she directed; however, she has directed a play before, and was assistant director in last year’s musical. Other than directing, Price has a lot of experience in being a part of the production team for many other plays and musicals. My interview with Price is as follows:

How did you first hear about Reefer Madness?

I kind of found it by accident. I was looking for a musical to put on my application and I had “Urinetown” and “How to Succeed in a Business Without Really Trying” already on there, and I had to find a third one, and I was like, ‘I don’t really need this, but I need an extra one.’ Finally, I found “Reefer Madness” and I read the Wikipedia summary, I watched the movie, and by the time I finished the movie it was TWO minutes before my application was due, but I was already in love with it. So, I put it on my application, and here we are!

Why did you choose Reefer Madness?

It was hilarious. When I found it, and right after I watched the movie, I asked Stephen (played Goatman), Jack (played Ralph) and Robert (Jimmy Harper) about it. Stephen and Jack had heard of it, Robert thought it sounded stupid, but the others thought it was hilarious. So I was like ‘let’s do it!’

What is your favourite part of the show? And why?

Do you have a favourite character? And why?

What was the process of getting the show completed like?

For me, the process started a full year ago when I started looking for shows that I wanted to put on my application. Then I made my decision. Last April or May was when we applied for rights, then we got the rights, we announced the show, and went through the summer making promo stuff like posters. In September we did the casting, and from there it was all just rehearsal stuff. That’s where everything starts getting really intense because you have the actual characters and the actors. You have to make the set, get the costumes, make the props, and talk to David Sylvester about different stuff with the show. It went from less intense stuff to more intense the closer we got to the show which is normal and to be expected.

Finally, do you have any advice for aspiring directors and actors?

Don’t be scared to do it. I was terrified, and up until we opened I was terrified that everything I had done was going to be seen as wrong. I was worried we were going to get awful reviews and awful ratings. I was worried that people were going to hate it, but then I watched the show and I realized that it didn’t really matter and that I didn’t really care because I had so much fun with the cast and the cast had so much fun. I didn’t care what other people thought. So, don’t be scared to do it because if you are having fun and you are loving it, then other people are going to love it too.

The show ended up being a great success which brought in many positive reviews from the audience who recommended that “people must go see ‘Reefer Madness’ because it’s awesome,” and that it was “a Grand Theatre worthy performance.”

There were many ways this musical was described, and some of the cast members were thrilled to provide their descriptions as well. Some of the best short descriptions were:

“A production filled with moments that will make you laugh endlessly and nervously.”

“Lots of death and sex.”

“Everything the church wouldn’t approve of.”

“If Romeo and Juliet got addicted to sex and weed.”

Overall, “Reefer Madness” was a very successful show for the King’s Players Theatre Company due to the high reviews and the fact that the company made back all of their budget money, and even some extra.

King’s players is an improv and drama theatre company. They meet every Thursday evening at 9:30 p.m. in the basement of Dante for improv meetings. Anyone is open to come and participate, or even just watch. Meeting every week is not a requirement from members: people are open to come and go as they please. King’s players puts on a play and a musical every year. Usually the play is in the Fall and the musical is always at the end of January. Aside from the shows and weekly meetings, King’s players participates in other events such as their annual 24-hour theatre, and improv war against other theatre groups. Also, every member gets a t-shirt!

Auditions for the next musical will be at the end of September in the 2017/2018 school year, so make sure if you are interested in acting and singing to come out and audition because the King’s Players theatre company is a wonderful family to be a part of!