"It's Only A Play" Review 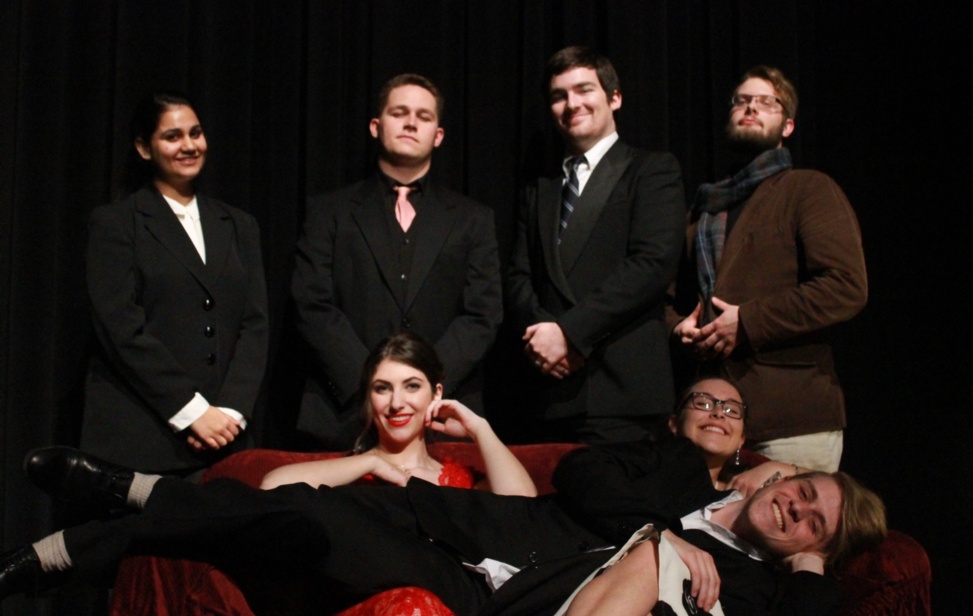 “It’s Only A Play” by Terrance McNally is the King’s Players latest theatrical undertaking. Directed by the acclaimed Seamus Sylvester, produced by David Carlson and Christina Donati, with stage managing by Danika Rasmussen and Emma Coelho,  “It’s Only A Play” was far more than just a play; it was a charming, amusing slice into theatrical life after the final curtain falls.

As an ensemble, the performance was nothing short of brilliant. As individual actors, each cast member offered a unique range of acting abilities that rounded out the rather simple plotline: It’s opening night of “The Golden Egg,” and the director, producer, playwright and main actress are anxiously awaiting their reviews.

Alongside them was James Wicker - the Broadway turned television actor who had turned down the lead roll -  and a hilariously ruthless critic who somehow ends up saving the day, Ira Drew.  The audience watched in delight as a hilariously outlandish series of a events played out in this tiny apartment above the opening night party that is bustling downstairs, as the cast and crew await the critics reviews.

The set remained consistent throughout both acts; a few well loved bottles of dark liquor, a couch, and a couple charming home phones. Both homey and retro, the set played a perfect background.

Sadaf Fatima as the charming “Gus” opened the play with her eager energy and hilarious timing. Fatima constantly hit the audience's funny bone with her charming excitement and fresh eyes into the world of Broadway, making her the insider we all wish we could be; as well as her uncanny ability to collect coats swiftly and efficiently.

Michael Donaldson as James Wicker (or Wacker, depending on who you ask) maintained the pace of the play like an old pro. His comedic timing and ability to bounce from emotion to emotion swiftly kept the audience engaged throughout various plot twists. He served as an anchor - an anchor in a Prada suit, to be exact.

Calla Elia is a siren in every definition of the word. Her portrayal of washed up Broadway actress Virginia Noyes was edgy and cutthroat, contrasting well with her beautiful on stage aesthetic. Her believably sporadic “ex” drug addict was as entertaining to watch as any Real Housewives franchise.

If Elia is a siren, then Aleesa Prendergast is a firecracker. Her enthusiasm and charisma did not dim for the entirety of her stage time. Her bubbly dialogue and charming ability to take on the role of “Golden Egg” producer Julia Budder was a true joy to watch. Her optimism and rambunctious dog did not cease to delight the audience.

John Knight as Frank Finger contrasted the high energy performance brought by Prendergast. Entering the stage with his hair heavily brushed in front of his eyes, I knew he was a character I’d like. Playing the all too successful British stage director, Knight delivered an incomparable performance as a man both down on his wits (due to his constant stream of positive reviews, a real issue for Finger) and a spastic role play of a  childhood trauma with a fuzzy sock puppet; a scene I could rewatch happily for the rest of my life.

The man behind the magic, regardless of what the New Yorker might say, John Ross McAlea as “Golden Egg” playwright Peter Austin. Commanding this rag tag crew to get on their knees to deliver arguably the most hysterical prayer sequence anyone in the audience has ever seen. His quiet power demanded to be heard, and it was a joy to listen to.

Last but certainly not least, the man who ends up saving the day and the play, Ira Drew, portrayed by Hayden Kusch. Entering a scene with lasagna on your face is a sure fire way to garner not only my attention, but my respect, and his calm, cool and collected portrayal of an insanely cut throat play critic clearly inspired this review.  With all jokes aside, Kusch was a refreshing character, adding hilarious comedic relief and gloriously stylish scarf accessorizing.

When all was said and done, “It’s Only A Play” was a total delight from beginning to end. All members of the cast and crew should be incredibly proud for bringing such an edgy and hilarious script to life. I’ll be remembering this play and that sock puppet fondly for many years to come.