A Company of Community: An Inside Look Into the King's Players Theatre Company 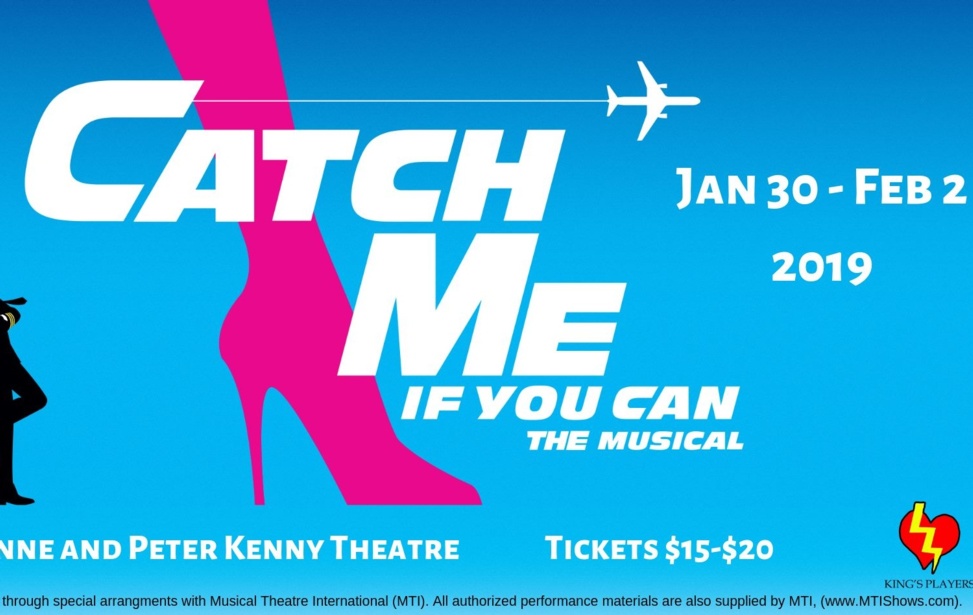 If you’ve spent any time on the King’s campus in the past couple months – and, hopefully, you have – chances are you’ve seen those eye-catching blue and pink posters decorating the walls and bulletin boards. This beautiful décor has been brought to us by our very own King’s Players Theatre Company and their spring production of Catch Me If You Can!

King’s Players is an entirely student-run, full-scale theatre production company here at King’s. Every year, they grace the stage with their talent for a fall play and a spring musical. Additionally, they have weekly improv nights every Thursday open to anyone interested!

I was lucky enough to have the opportunity to talk to Catch Me If You Can producer and King’s Players Theatre Company president David Carlson (DC), and director Thalia Ranjbar (TR). Keep reading to hear both of their insights on what makes King’s Players such a unique and fun part of the Western community!

Why did the King’s Players Theatre Company choose to produce Catch Me If You Can for their spring musical?

DC: "Our method for choosing our shows is that, near the end of the academic year, we ask for applications from directors. In their application form, they are asked to create three show proposals that they would like to direct. When Thalia put forward Catch Me If You Can, we all loved the upbeat sound that was helpful in propelling the story to life. The comedic nature of the main characters telling the story to the audience instead of having the audience observe the show going on, while still being an intensely engaging piece of theatre made it the perfect fit for King’s Players. We wanted to challenge ourselves this year by pushing ourselves to showcase the best acting, singing, and dancing that the Western community has to offer, and I think we delivered on that challenge."

TR: "First and foremost, the music of the show was the biggest draw for me. I felt so instantly inspired by it and knew that it would be a show where I could incorporate a high caliber of dancing. This musical is important to me because while I am a director, I am also a dancer. Nothing is quite as satisfying as putting on a show that has challenging, interesting choreography, along with beautiful vocals and acting. Because I was sure I wanted the show to be dance-heavy, I knew it would be an opportunity to have a large ensemble, plus a dance core. I think I can speak for Kings Players when I say it is essential to us that we provide as many opportunities for involvement as possible, and a show of this nature allowed us to do precisely that."

What do you think King’s Players offers students and the King’s UC community as a whole?

DC: "Above all, King’s Players is a community. During our inception, we were an improv club held together by a tight-knit community that still exists today. Although we began as a small improv club, we began to push ourselves to do more with some exciting events that had some production value while still staying true to our roots. Eventually, we had the development of the mainstage programming series, which is what allows King's Players' exceptionality to come to light. Being a fully capable theatre company producing two large scale productions a year, while still offering our weekly improv meetings, and our collection of in-house programming series makes us stand out. We strive to introduce a sense of that close-knit community feel in each our productions, while still putting on amazing shows that those in the community can enjoy while also making King's proud."

TR: "King’s Players offers students a very well-rounded theatre experience that welcomes absolutely all levels of capability. We provide opportunities to try improv; every year there is a play and musical; and also dance classes that cover an assortment of genres. Besides that, there are ample opportunities both on and off stage for people to get involved whether it be for the play or musical. That said, those who are or are seeking to get involved with King's Players will find themselves in a safe and accepting space on campus. I have never witnessed an organization that is so supportive and friendly. King’s Players is willing to give people a chance to try things they have never done before without the risk of judgment, which allows people to grow and step out of their comfort zones beyond what they may have initially thought was possible."

How has joining King’s Players affected your life at King’s? What encouraged you to join?

DC: "I have been involved in theatre since I was in Grade 4 as a member of the Original Kids Theatre Company, but after high school I decided that I no longer wanted to do theatre. At KUCSC Clubs Week in my first year, I came across a booth talking about improv meetings, where a friend of mine encouraged me to try it out. From there, I was talked into auditioning for Reefer Madness, the musical that year, and became the vice president of the club that spring (2017). King’s Players has not only given me some fantastic opportunities that have allowed me to test myself as a performer and leader, but it has also led me to establish some of my strongest friendships yet. Instantly feeling accepted and comfortable taking risks is not something that can be easily achieved and has made my experience at King’s what it has been."

TR: "I am a Main Campus student but joining King’s Players transformed my university experience. I didn't know about it until I was in the third year, but because of King’s Players, I found a place where I felt like I belonged here in London. I was encouraged to audition because my friend, Amy, knew the girl who was directing the musical that year, and I'm so thankful she forced me to sign up! My first experience with them was through the musical Reefer Madness, and then from there I also went to many of the Thursday night improv meetings, kept doing the musicals, and started up the dance program within the company! I made some of my best friends and best memories by joining King’s Players."

Do you have any advice or words of encouragement for students who are considering joining King’s Player?

DC: "Take that risk! Anyone is welcome to drop by one of our Thursday night improv meetings or one of our events! Buy a ticket to the musical and get a sense of what we are all about. We encourage people from all experience levels in every year of study to audition or apply to work on our productions. Send us a message on our social media @KingsPlayersKUC to find out what opportunities we have coming up!"

TR: "I would say if you are even remotely interested but maybe a little nervous, bite the bullet and get involved! You will find that you are in a place where you can be yourself, express yourself, and be part of a wonderful community."

Are there any upcoming events that the King's community can be able to look forward to soon?

DC: "You don’t want to miss Catch Me If You Can! In my opinion, this is THE event of the year. It’s the one you can’t miss out on! There is something for everyone in it; if you have never seen a musical before or think for some strange reason that you hate theatre, give it a try! The show is an engaging and sometimes sexy story that will make you laugh, cry, and tap along to the excellent soundtrack. Our social media accounts sometimes send out promo codes to receive a discount, so keep an eye out for that too. We have a couple of events planned for later in the semester, some of which are yet to be announced."

So, there you have it! It’s clubs like King’s Players that make the King’s experience so unique, providing opportunities and welcoming spaces for any students. If you haven’t purchased your tickets for Catch Me If You Can or would like more information you can find it all on the Facebook event, here. Make sure to catch a show between January 30 and February 2 and follow @KingsPlayersKUC on social media for any discounts or future opportunities!